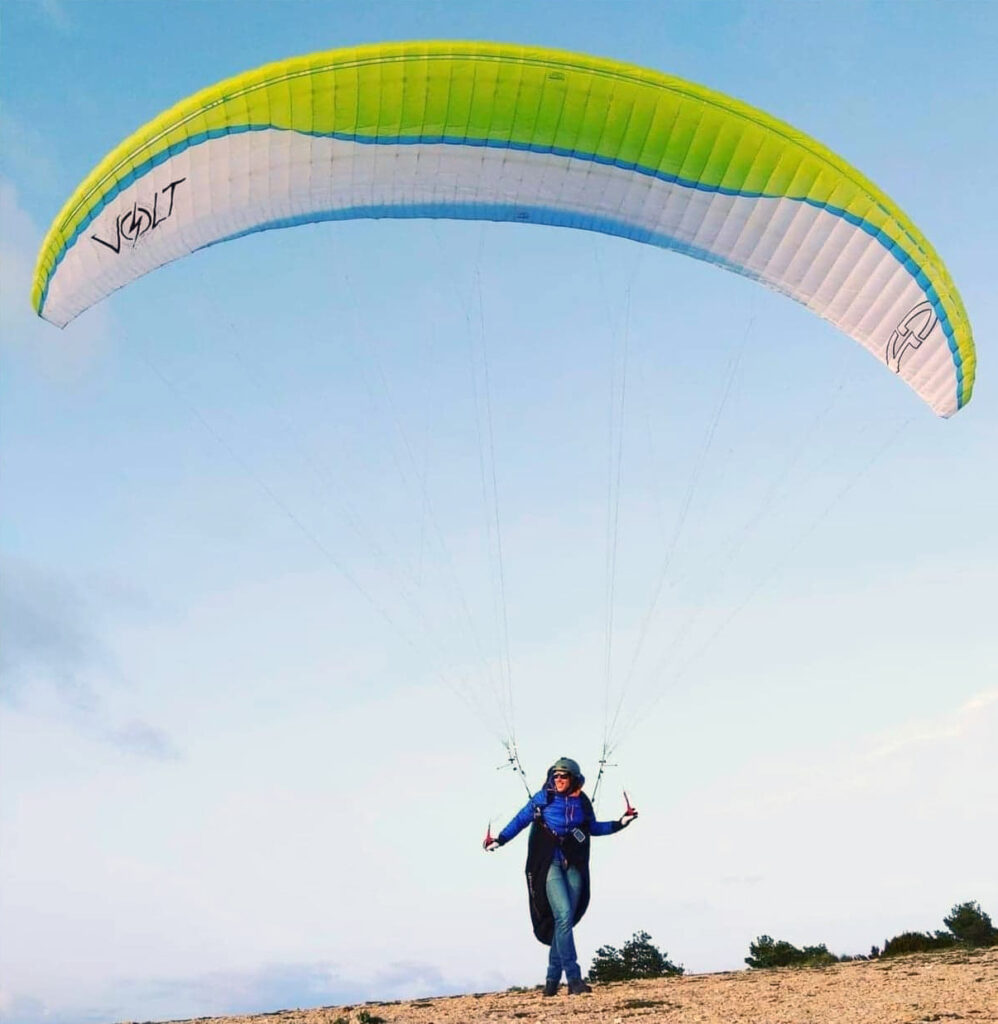 Summary
The AirDesign Volt 4 is a fast, direct handling wing that can be flown properly on the rear risers. Having previously owned the OXA3, feel this is the perfect replacement for it.

Glider finish and equipment
The glider looked exceptionally well finished, the think risers were very easy to sort out and the lines didn’t tangle and the solidity provided by the nitinol rods was great. I am not in love with the plastic pulleys on the speed bar, not sure of their longevity vs metal equivalents.

The glider came with a useful bag of patches, a keyring, a buff and the line length report.

The glider arrived packed in its half saucisse bag which I was curious about, but suspected I wouldn’t particularly like… To give it a chance, I didn’t take my swing saucisse so I’d have to persevere with it at least once…

I had watched the video of how to pack it and did manage to get it in the bag at the end of my flight, but it was pretty rigid and a faff, I got home and transferred the glider to my swing bag as that way I can also wrap it around the harness

Launching
With the nitinol rods, I would describe the glider as semi lightweight. It was super easy to pull up in a light breeze and I felt instantly at home on it even before taking off.

Flying
Gliding and rear riser flying
Du Toits Kloof is a tricky site to get away from, I launched into a light cycle and immediately was aware of the higher trim speed than the sigma 10 I was flying for the past few days. The wing accelerates into thermals, had no tendency to hang back and by the fact I got up and the others didn’t would suggest it is floaty.

On the first transition I used ⅓ to ½ bar, the sink rate didn’t increase very noticeably, the wind noise and speed did!

I then followed the ridge and decided I would never turn back and push, I left most climbs early, applied half bar and controlled the wing on the rear risers.

Having less AR than the OXA the wing felt even more secure on the rears. There were a few shear layers, convergences and different air masses which meant the air was a little rock and roll. Controlling the wing on the rear risers was easy, I never had to come off them when going through rough air.

It tried to collapse once, I pulled hard on the rear riser and it popped straight out and there was no change of direction.

Thermalling
Having a lower AR means there is far less tendency to be pushed out of thermals and I felt the glider climbs really well in strong lift.

I had one low save from 130m agl and was able to turn efficiently and flat. Like most modern gliders it has the capacity to help you find lift and certainly pulled me into the lift.

Conclusion
I loved my OXA, I purchased the Klimber 2p, but did not like it, I felt that the rear risers pulled a bit of wing rather than the wing, I also felt I would destroy it super fast as it is so lightweight.

The AD Volt 4 is in my mind the perfect compromise of performance, safety and weight. I believe 2 liners are safer than an equivalent 3 liner and if going to fly in super big air, I would rather be on this than any other wing on the market today.

I am sure the Ozone Aura/Aurora? and other manufacturers 2 liners will be brilliant to, but for now this has to be the best EN C on the market. I look forward to Ziad’s performance comparison for the EN C class, I suspect he will have to rebase the norms
to make it work!